Family Crests and Shields from the family lineage. Family legacy is a matter of pride for one and all. To characterize, celebrate and exhibit the same through the family coat of arms has been a tradition for the longest time. Usually designed on a shield with heraldic carvings or designs, identifying the individual, his family legacy and achievements and the symbolic motto passed on from one generation to another.

Historically used on armour coats on battlefields to identify one’s own soldiers from the enemies, the tradition got passed on to squires, priests and eventually to the commoners and the peasants. As there has been a lack of any specific regulation on the use of arms and heraldic designs, the use and display of the family coat of arms has been followed as a tradition throughout Europe.

Though initially, the individuals had a specific and unique heraldic design of the coat of arms, the same got mingled with the family customs and became a family lineage. Though traditionally displayed don coats and suits, there are several ways in which the same now get showcased innovatively. The change came about due to reasons of convenience, changing lifestyles and changing fashion trends. The newer avatars in which the family coat of arms get typically displayed are:

A finger ring is something that is hardly ever separated from the individual. And hence it is the best way to showcase the family legacy at all times. There are many places where the family crest is designed and engraved on the ring, thus helping each member of the family to proudly expose the family legacy. A good substitute for the family coat of arms in the traditional avatar, this new way of displaying the same is not only innovative and classy but also a lot chicer.

Another way to showcase the family legacy is through engraved pendants with shield designs or heraldic designs that stand for all that the traditional achievement signifies. Easily worn by all the members of the family, it is the best innovation to the traditional family coat of arms.   Engraved Heraldic Plaques – One of the best gifts to any family member on the occasion of a wedding, anniversary or birthday. Heraldic plaques engraved in the family legacy can be more precious than any other material gains for many. As a display in the house, these plaques can be a great source of nostalgia and pride.

These, and many oath avatars, make for a great and innovative form of the family coat of arms! And for the bold and the wild, the family coat of arms in the form of a body tattoo can be a symbol of immense pride as well as great style!   The entire assemblage of what is often incorrectly called a “coat of arms”, is correctly termed a heraldic “achievement”. There are six basic components of achievement. and each is discussed below. 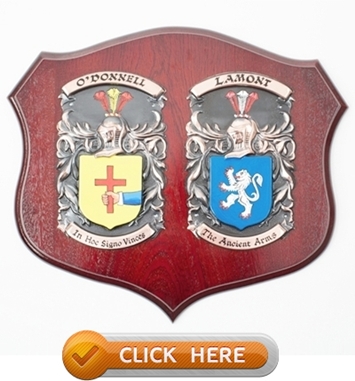 There must be a shield in every achievement. It is the essential centrepiece and, indeed, the item most people think of when they hear the term “coat of arms”. This latter term is a valid one when referring to the shield, as is “the arms”, although the original coat of arms takes its name from a garment worn by the knight. The sun’s rays could easily heat up exposed metal armour, and thus a knight would wear a linen coat over his mail. This “surcoat”, as it was called, came to bear, on both front and back, the knight’s arms – a copy of the device already upon his shield.   The size, shape, and even the angle of the shield can differ when portrayed in heraldic achievements and in a family coat of arms.

This usually sits atop the shield and can be of four basic types, all of which indicate rank: Royal, Peers’, Baronets’/Knights’, and Esquires’/Gentlemen’s helmets. These types are graphically distinct, being based upon different forms of the military helm.

Just as the surcoat protected the knight’s thoracic armour from the sun, so the mantling protected the back of the helm from the sun’s heat. Sometimes this cloth cape was displayed in ribbons, representing the idea of the veteran soldier (knights that had been involved in intense battles or a long campaign often returned home with their mantling slashed).

The wreath was a circlet of silk, around which either gold or silver cord was twisted. It sat upon the helm and covered the join between the mantling and the crest. It also fastened the crest to the helmet.

The crest, as the name implies, was worn on top of the helmet. It may have been a fan extension of the helmet or even a boiled-leather attachment. One thing that must be said about the crest, however, is the misuse of the term. It is often applied today (in such terms as “family crest”) to the “coat of arms” or the entire achievement. This is incorrect. The crest applies only to that component of the achievement that sits on top of the helmet.

The motto can be found either below the shield or just above the crest. These are many and varied, long or short, bold or obscure, and written in Latin, English or any other language that has graced, or still graces, the shores of Western Europe. There are other components to the achievement or coat of arms for which users may be granted, but the above are the basic components that exist in nearly all achievements.

We use cookies on our website to give you the most relevant experience by remembering your preferences and repeat visits. By clicking “Accept”, you consent to the use of ALL the cookies.
Do not sell my personal information.
Cookie SettingsAccept
Manage consent

This website uses cookies to improve your experience while you navigate through the website. Out of these, the cookies that are categorized as necessary are stored on your browser as they are essential for the working of basic functionalities of the website. We also use third-party cookies that help us analyze and understand how you use this website. These cookies will be stored in your browser only with your consent. You also have the option to opt-out of these cookies. But opting out of some of these cookies may affect your browsing experience.
Necessary Always Enabled
Necessary cookies are absolutely essential for the website to function properly. These cookies ensure basic functionalities and security features of the website, anonymously.
Functional
Functional cookies help to perform certain functionalities like sharing the content of the website on social media platforms, collect feedbacks, and other third-party features.
Performance
Performance cookies are used to understand and analyze the key performance indexes of the website which helps in delivering a better user experience for the visitors.
Analytics
Analytical cookies are used to understand how visitors interact with the website. These cookies help provide information on metrics the number of visitors, bounce rate, traffic source, etc.
Advertisement
Advertisement cookies are used to provide visitors with relevant ads and marketing campaigns. These cookies track visitors across websites and collect information to provide customized ads.
Others
Other uncategorized cookies are those that are being analyzed and have not been classified into a category as yet.
SAVE & ACCEPT